The young Israeli Asael, who was the victim of a terrorist attack as a child, travels to Hamburg to realize his dream as a wheelchair basketball professional. Here he meets Iranian Ali, and an unusual friendship emerges. For one season, they live together with their basketball team in a house that is on the grounds of a hospital. Here also lives Julian, who is paraplegic after a fall and can only accept laboriously with his new life in a wheelchair. The encounter with the wheelchair basketball players impressed Julian, and he became an enthusiastic supporter of the team. While Julian prepares to live independently in a wheelchair outside the clinic, Asael travels back to Israel, and we learn what has really happened on the night of terror. 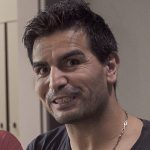 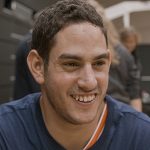 Watch the movie at your school

Classes become movie theaters “Fourteen and a half Collisions” tells the story of the unusual encounters and strokes of fates without prejudices. After its premiere at the Filmfest Hamburg in 2018 the cinema documentary now takes over the schools and turns the classes into movie theaters. Filmmaker Guido Weihermüller and his team followed the protagonists over a period of one year and deliver a sensitive documentary which challenges the audience perspectives in many ways. With a SCHOOL-LICENCE the class room, the...

The initiative "VIERZEHNEINHALB for everyone" has the goal to show the film in a barrier-free environment. We believe that this way the film could be a cultural contribution to inclusion and diversity of our society –- due to the fact that most cinemas offer only few places for wheelchair users. Even before the official theatrical release, institutions, companies or other organizations can apply for a film sponsorship and thus support a special, barrier-free presentation. For information, please send us an...